Every agency in the world has some sort of in-house shared playlist type hack going on. And this is POKE’s. In the year or so that it’s been in operation, it has become an important cultural cornerstone to our little family, and not without controversy.

Like many thing’s on here, Poke Radio has a RaspberryPi at its heart, almost. The heart is probably the Django web app to which people submit their playlist contributions. This list is consumed by a RaspberryPi running a scriptable interface to Spotify called Mopidy. As well as just holding a list of tracks, the PokeRadio web app allows users to vote up and down the tracks that other people have queued. This makes for some interesting behaviour observations. Especially since we introduced a feature where a track receiving 5 down votes would be scratched (record scratch sample) off. Oh and there’s a socket server too, to keep the browser view up to date with what’s playing. 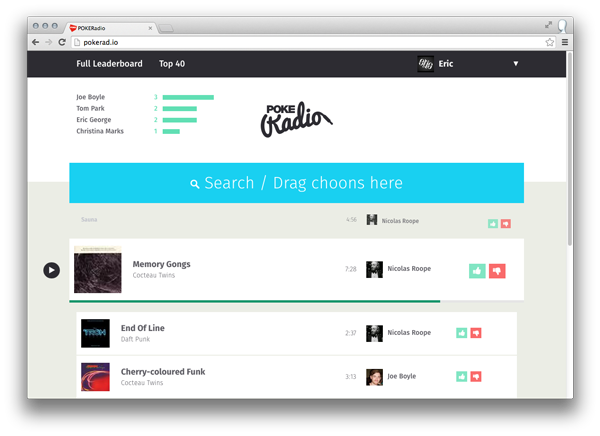 This is quite different to a normal client advertising project, and certainly feels more like a product. We can see people using it every day, and users are often excited to report new ideas, observations or recommendations for future features. It’s pretty unusual even in a product context to have such good access to the user base; when we deploy a new feature it’s uptake can literally be seen from looking across the room!

People with root access to critical systems and databases always have a certain responsibility. But none more so than those with the keys to the communal office music player! The development team have solemnly vowed to uphold the democratic process at all costs. Even if some crackpot wants to play 4 hours of Katy Perry. We can rest assured that justice will prevail, and we probably won’t have to sit through it all, thanks to the diligent voting of the rest of the studio.

So far, we’ve played about 30,000 tracks, the plays and votes around this paint an interesting picture of trends and traditions over the last year and they are always evolving. 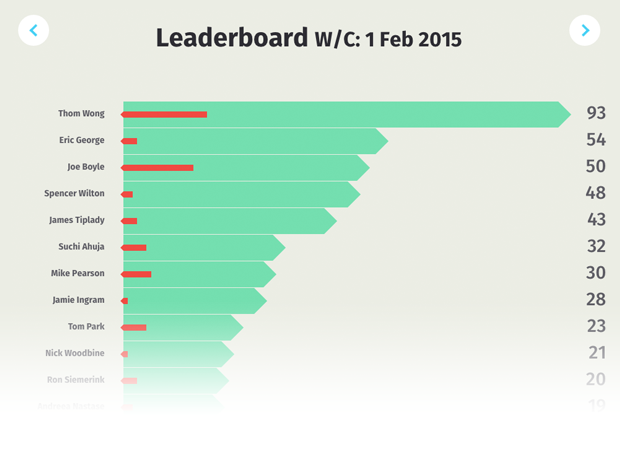 We’ve made available the various components of PokeRadio on Github for anyone brave enough to try setting it up. Eventually we hope that other contributors might even start to appear.